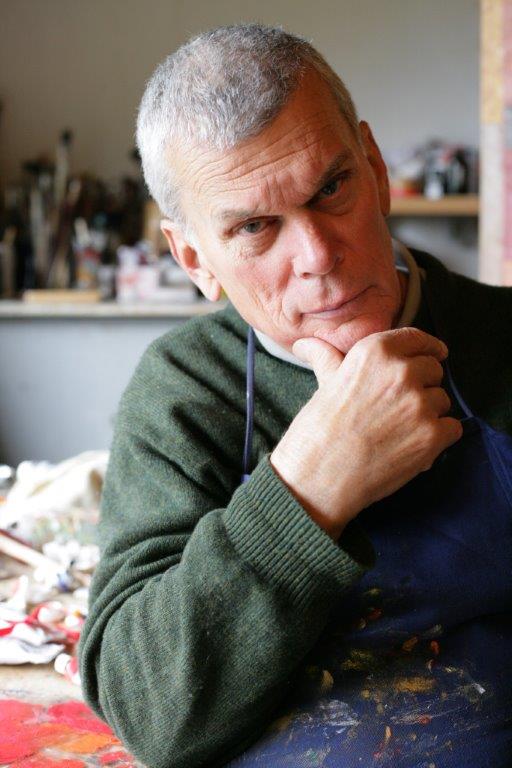 Richard Hirschbäck was born on the 2nd July 1937 in Schwarzach St. Veit in Pongau. Despite the war years, he enjoyed a happy childhood and at the age of 11, he was sent to the Benedictine boarding school Edmundsburg in Salzburg. There, he experienced overwhelming homesickness and found that the only way to relieve his separation anxiety was to incessantly draw.

The acquaintance with Rudolf Hradil directed him to spend time producing studies of live models, a discipline he felt laid a firm foundation to all his subsequent work. Upon the advice of Hradil, in 1956 Richard Hirschbäck went on to study at the Academy of Fine Arts in Vienna under Prof. Albert Paris Gütersloh.

Although Gütersloh indeed belonged to the school of magical realism, which was very much popular at the time, he proved to have created a profound influence in another aspect, by teaching Hirschbäck to trust the instinct of hidden associations. During his studies, he would often escape to Burgenland, where a series of small-format landscapes originated. These were exhibited by Ernst Fuchs in the gallery in Millöckergasse in 1958.

In this period, the landscape motif transformed into a geometrically constructive form, a common practice in these years. Here, spanning across a series of meticulously studied works, the image of geometrically arranged fields appears a slowly constructed landscape covered with different layers of fabric. Apart from that, Richard Hirschbäck also indulged in investigating the gesture which is apparent in his work of this period and coincided with his return to live on the countryside after his studies at the Viennese Academy. Threat and destruction to the countryside represented a preoccupying topic in his work, however, he was not satisfied with the fact that his work could not have a more direct impact, and that it only represented an “immediate usefulness”. To break away, he returned to constructionist work again, where a characteristic series of geometric, almost mathematically calculated drawings and paintings came into being.

From the end of the sixties, he was more outward and actively participated in exhibitions and the Austrian art scene. This decade was also marked by a great change in his family life – between 1962 and 1973, six of his children were born.

In 1969 he became a member of the Grazer Secession and in 1971 a member of the artist’s association of Salzburg. In the seventies, we see a diverse range of interest and focused research. Surreal, poetic landscapes dominate at times, but are balanced with works that represent clean and precise studies of form, colour and composition. In 1977, a group of artists broke away from the Secession and formed the artist group, Group 77. Group 77 organised a large number of group and solo exhibitions of their members which were held in many important galleries and institutions across the country as well as abroad in Germany, Hungary and the Czech Republic.